[Release] Races of Akhamet: Mesaru in English and Francais on DriveThruRPG - 2022/12/18
Available on DM's Guild.

Akhamet is a fantasy setting inspired by ancient Egypt. The land is dry and is mostly desert. The gods have names and attributes you recognize: Anubis, Seth, Sobek. But they are not the gods of the Ennead.

The land has been ruled by Pharaoh for almost twenty five centuries. He is the god of the Sun and the defender of the land against the terrors of night and of the desert. His benevolence allowed Akhamet to be at peace for all these years.

But Akhamet faces a major crisis: Pharaoh is dying. This plunges the whole empire in a crisis it never had to consider.

The setting features a number of unique take on well-known tropes. 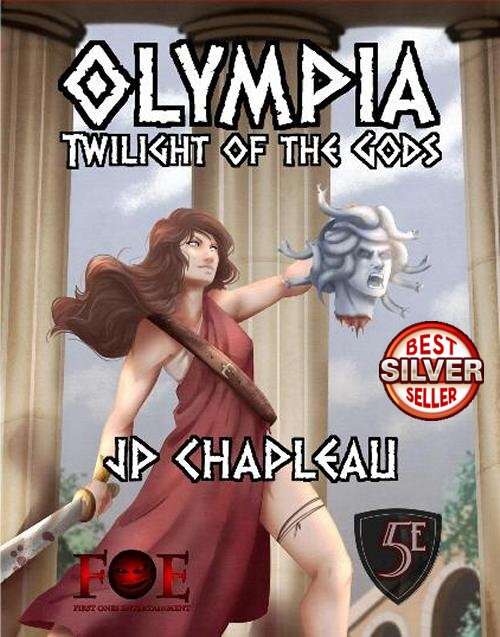 Olympia is a setting inspired by the myths of Ancient Greece.

In Olympia, the gods are not distant, all powerful entities, but living breathing creatures of great power who live among their people. Anyone with enough reputation can meet with one of the gods.

As factions form to take on the power of the gods themselves, you are confronted with many choices regarding whether to support the gods of Olympus, support new ones, or rise yourself to take the mantle of god yourself.

In Olympia, the many city-states are organized in leagues forming loose empires across the many islands.

The Tyrants of Saggakar setting is one where the villains, a race of creatures known as "The First Ones" conquered the world in a series of bloody campaigns. They now rule with an iron fist, forcing all others to do their biddings. They have since installed a system where they enslaved everyone.

All around Saggakar is an impassable Wall of Mists from where people emerge on occasion. These people remember nothing of their lives beyond the Mists, only their name and abilities through muscle memories.

The setting focuses on themes of freedom, free will, and choice, forming dichotomy with the obvious themes of coersion and slavery.

Rhym is a fantasy setting in a world under the rings. Rhym features flavorful nations based on historical nations but with fantasy twists. The setting features a number of unique take on well-known tropes.

Written by veteran gamer JD Conrad, Rhym with playability in mind. This means that every page is filled with adventure and campaign ideas. The history, nations, secret (and not-so-secret) organizations, and people of Rhym both are very approachable while being unique and filled with story potential.

The Church of the Wheel is the most important religion of Rhym. Its priests belong to one of the many orders and are all considered part of the faith, regardless of alignment and orders. Each member of the Wheel promotes virtues and decries sins, all presented in the campaign setting book.

Gostor stands for a Grumpy Old Schooler's Take On Rules is a series of products aimed at providing additional material for your campaigns. Whether system-agnostic or system-specific, Gostor can add some flair and flavor to a game without requiring a massive re-tooling of your world. These are made to be plug-and-play.

The Legacies Organized Play Campaign is a worldwide campaign where you, the players, get to make choices that affect the world. These changes are reflected in the on-going campaign. As you play more, you will compile a series of these choices, forming your legacy.

As you play, your character will level up, make friends and enemies, earn gold and rewards. You can bring these rewards with you to any Legacies campaign table using the same rule set (as of right now, we are running games using Dungeaons and Dragons 5th edition and the Pathfinder RPG).

Join our Facebook Community We have a thriving community of players in our Facebook group. We organize games there all the time online and in person.

Adventure: Gold Chains Writing
(Formerly Slavers of the Dominion) Revisiting an old favorite and updating it from Pathfinder to 5th Edition. For the DMsGuild.com

Access gained through a Legacy Record may include items otherwise not available or not allowed in this list.

Any resource that was previously accessible but not on this list is grandfathered in for that character.

Tyrants of Saggakar: Service is Eternal (5e) FOE
This book is all legal for play for haver characters and anyone with an LR making them First Ones.

Player's Handbook Wizards of the Coast
This book is all legal with the following exceptions. Humans (and human variant) are fully legal for play. Awaken spells are not legal for play. Other races available for characters starting in Rhym only.

Volo's Guide to Monsters Wizards of the Coast
Bugbear, Goblin, Hobgoblin, Kobolds, Lizardfolk, Orc and Yuan-ti pureblood (called Serpentfolk in Rhym) are legal for play starting in Rhym only.

Xanathar's Guide to Everything Wizards of the Coast Fully legal.

In addition to our regular product lines, FOE dabbles in other products, not quite full-on product lines these products are one-offs and reprint of products written many, many years ago.

Products only available on DM's Guild

Fortress of Fire On Hold
A 5th edition High-Level adventure

Justice League Hillbillies Pre-Production
What if the Justice League established a chapter in Nashville and stereotypes superheroes joined up? A comical superhero adventure

JP Chapleau is the mind behind most of this

The following people have written for FOE and created great products.

The following people draw for FOE.

FOE is always looking to work with talented writers and artists, be they new or established.
- Adventure writers: Do you want to write an adventure or have a great idea for an encounter?
- Setting writers: Do you want to contribute to our existing settings? Create a city or one location?
- Rules items: Do you have a great idea for a feat, a class option, or a piece of equipment?
- Have an idea: Is there something you think should exist but does not?

If you answered yes to any one of the above, contact FOE today and see your name in print tomorrow.

How did FOE came to be?

FOE was created in 2013 by JP Chapleau. Until then, JP worked with other publishers, including Wizards of the Coast, Paizo, LPJ Design and Pagan Publishing. FOE's initial goal was to publish adventures for the Legacies Organized Play Campaign.

In 2014, FOE launched the Gostor product line to provide simple and elegant rules addition to the game. These products are designed to be plug-and-play so you can use them in your campaign with minimal disruption and get to playing quickly.

In 2015, FOE launched its first campaign setting, Tyrants of Saggakar mixing a wide variety of influences into a setting willingly made to be dark and brooding, dominated by the forces of evil. Yet, amid all that darkness is the glimmer of hope.

In 2018, FOE continues to inovate by creating settings, new world to add to both the FOEniverse and the Legacies Organized Play Campaign with the Egyptian-inspired Akhamet campaign setting.

In 2018, FOE expanded by launching the FOE Patreon to expand its business and produce more content.